Work of Art: The Next Great Artist is a reality competition show that airs on Bravo. Up-and-coming artists compete for a solo exhibition at the Brooklyn Museum and a cash prize of $100,000. The contestants compete with each other to create the best work of art and are restricted in time, materials and theme. Their designs are judged, and one or more artists are eliminated each week.
EtsyMetal has played along with the Work of Art challenges and invites others to participate as well. Here is how it works: the day after the show airs we  post a translation of the challenge on our blog. Participants have one week to make a piece and must submit it by midnight of the next Wednesday, when the show airs.
I started late on this series. 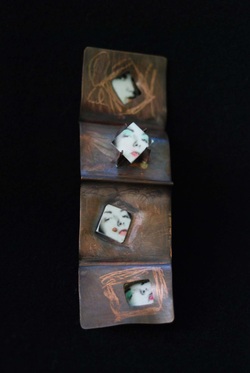 Premiere: October 26, 2011
The contestants must create a piece of POP art that captures the popular culture of their time.

I spent a large part of my college years in a photo booth and then the rest of my time making stuff with the pictures. This is a metal interpretation of one of my photo strips, 4 different settings, each with a photo booth shrink dink. Fold-formed copper. Prisma colors.

Episode 4: Back to School 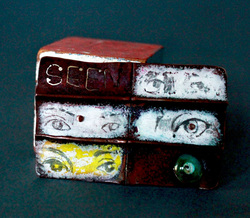 Premiere: November 2, 2011
The artists are challenged to create a piece of art inspired by the original artwork of the child they are paired with.

I used the art from one of the kids on the show, but I can't find a copy of it online. It was the one where this kid just drew eyes. His eye drawings were fantastic and totally inspired me. I have tons of old family photos. I cropped out the eyes and enlarged them; then drew them; then folded a piece of metal into 6 rectangles; pierced out 'seen' in the top panel and dapped an indentation on the bottom panel; enameled 4 of them white then drew the eyes of me, my mother, my father and my grandmother with graphite and refired them. I put a glass eye bead into the indentation; then riveted on a handmade pin back. I also added some alcohol inks.

There are a few things I would have done differently. I'm going to have to do this again.

Episode 5: Ripped from the Headlines 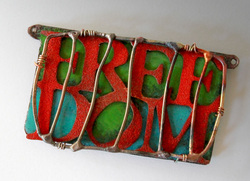 The artists must create a piece of art that illustrates a headline which strikes a chord with them.

My headline was from the 'opinion' section, "Occupational hazards of patriotism" from the SF Chronicle.

The article was talking about the Occupy Wall Street movement, specifically the protest by UC Berkeley students, specifically protesting about UC Budget cuts. Officer were called and arrived in full riot gear. 32 students were arrested, "One female professor offered her wrists for cuffing, and was instead held and then dragged by her hair across the lawn... the students were not violent. They were engaged in an act of necessary patriotism vital to any democracy, exercising their rights to freedom of speech and peaceful assembly."

Growing up in Ohio in the 60's and 70's, this struck a chord with me. It reminded me of the shootings at Kent State. Maybe the phrase "full riot gear" specifically. And how we have to be careful that these rights aren't taken away and turned into a violent power struggle.

My piece is a pendant done in the style of Robert Indiana's famous LOVE poster and sculpture. 'Freedom' was pierced out copper and enameled red with a sugar coating. Sandwiched in-between a copper enameled background of green and blue and fused copper wire resembling a jail cell. 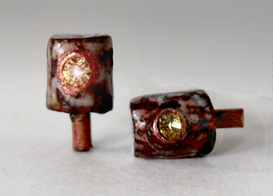 The artists are challenged to leave their mark on New York with a work that embodies the subversion of street art.  Use street art as your muse. Have fun and don't do anything to get yourselves arrested on this one

I saw this as a great opportunity to make my son a pair of earrings he had designed about 6 months ago. He has done his share of street art, so he wanted me to make him the nozzles off of a spray paint can. With some bling in the spray hole. Well, I kept putting it off because the whole thing seemed very complicated to me. So when the work of art challenge was street art, I felt it could motivate me to make them.
They are on ss posts that you can't see in this picture. And figuring out the order to do things was also very interesting... melted a few posts along the way. They have faceted swarovski crystals in the spray hole.

So my son came home last night and I showed him the earrings. He liked them, but he told me what he really wanted was something flat, so you could see the top and the arrow, with the stone set in. Well, of course I didn't know that and went the whole way of constructing spray paint nozzles in 3-d!
_________________ 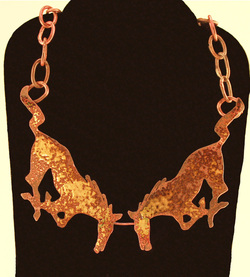 The artists must utilize one automobile component from a Fiat 500 and transform it into a piece of art.

Ok, this is not from a Fiat.
My first car ever, was a pea green '65 mustang convertible with pony interior. I loved that car. Perhaps I loved it too much. It broke down almost every week and I just didn't have the know-how or the money to fix it, so I eventually sold it to my boss's 16 year old son. I worked for a sandblasting company and they restored and collected cars. I think he still has it.
So in memoriam for my 1st car I took the emblem of the mustangs and pierced them out of copper, enameled them and added fused copper chain. 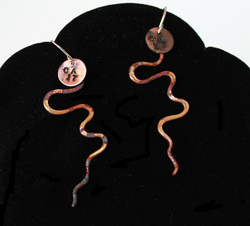 Premiere: December 7, 2011
The artists work in teams to create a minimum of one piece of art to sell to the public, but that is also worthy of presenting in a gallery show.

Since we all already sell to the public the chioces are...
a. Collaborate with at least one other person (jeweler or non-jeweler) to create a piece
b. Create a piece that could be in production but is unique enough to show in an art gallery or magazine

Other interpretations are welcome. This one is a bit vague.

I used CA Highway 17 as my inspiration. "It connects Santa Cruz and Santa Clara counties. Built in the 1930's... Today more than 75,000 vehicles a day use the beautiful but dangerous road for recreation, access to work, vacations and commerce.... spans 25 miles... it is also a road that many people hate or fear. " From "Highway 17 The Road to Santa Cruz" by Richard A. Beal.

I am among those that fear Hwy. 17! Twisty 2-lane mountain road, where people travel way too fast and even worse in the rainy season.

These earrings are made with hammered 16 gauge copper wire and enameled by torch firing.

Back to Etsy Metal